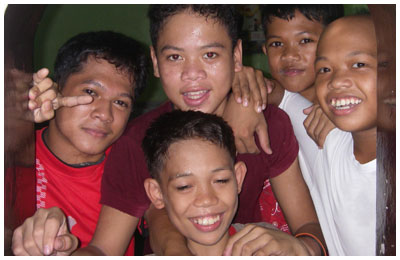 In the most Catholic country in Asia, the first Congregation community dates back to 1988, based in Manila. Over the years the congregation has  promoted social initiatives such as the Centers for children in need in such places as Cebu and Catarman.

With the support of the Friends of Our Lady of Good Counsel and through the Italian Catholic Church, the Congregation w

elcomes children/adolescents with disabilities in Quezon City Center in the Father Monti Shelter Home.  Since 1995, together with Dokita (a world-wide non-profit association), the congregation has been supporting the Home for the benefit of children with disabilities, abandoned children and orphans, and since 1999 at the Santo Niño Center located on the Island of Cebu. CFIC supports the “Holy Child Center” for street children where activities include recovery,  social adaptation, occupational education, games, information technology start-up, development of handicraft activities. they assist with hygienic, sanitary, educational psychology and food requirements. 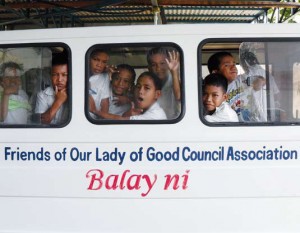 The public hospital service covers medical and para-medical expenses but not medicines. Consequently, the poor (and there are many of them) are unable to follow prescribed treatment for their illnesses. Malnutrition is chronic among preschool and school-age children, as well as among pregnant and lactating women. It is estimated that approximately 2 million children are exposed to risks related to hazardous work environments (i.e. mines, quarries, port works). It is estimated that about 60,000 Filipino children are involved in the sex-for-sale industry. Moreover, official figures speak of at least 22,000 street children. Of the more than 10,000 child victims of abuse in 2000 over 70% were girls. 44% of these were sexual abuses, while other forms of abuse affect abandoned boys and girls, who are neglected or exploited as workers.