Since 1993 the congregation has among its members the first religious Bolivian and has the collaboration of the Italian NGO Dokita.

Many people living in the Wams province suffer tuberculosis because of the warm-humid climate, widespread malnutrition due to the state of poverty in which most of them live, poor hygienic conditions, small and unhealthy lodgings . Those suffering TBC are usually treated in the nearby town of Santa Cruz de la Sierra for the time necessary for negativization. When those people are discharged from the hospital they may have solved the clinical problem, but they still face other major physical and social problems: greatly debilitated physica 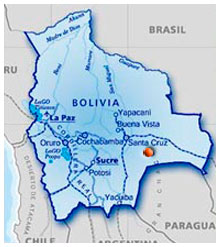 l state, the inability to return to work, the fear of having a brief relapse and then once again becoming a cause for the transmission of the disease to close relatives.

CFIC has been present in this area for a few years and has prepared a project involving a reception center for the psycho-physical recovery and social reintegration of these former patients.  CFIC Day Center (Latin American Province), is a facility that provides assistance to minors and focuses on the target group of needy children and their families in the Las Pampitas neighborhood of Santa Cruz de la Sierra, which has no services or support facilities except for a school.