The Congregation of the Sons of the Immaculate Conception was founded in Rome on Sept. 8th, 1857 by the Blessed Luigi Maria Monti. 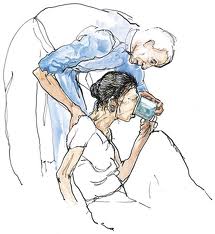 In 1857 Padre Monti arrived in the Holy Spirit Hospital and founded The Congregation of the Sons of the Immaculate Conception with the scope of assisting the sick and educating those youth in need. With the Immaculate Virgin as the mother and the patroness,  the Congregation first spread in Rome, Lazio, Orte, Civita Castellana, Nepi, and Capranica.  Until his death in 1900 Luigi Monti spent his energy also giving religious formation to his religious brothers so as to continue to serve the needy and abandoned.

Today members of the Congregation include brothers, priests, doctors, pharmacists, teachers, lab technicians and nurses.  The CFIC is present in over 20 countries all around the world including Italy, Argentina, Bolivia, Peru, India, Cameroon, the Philippines and more! Many of these facilities work alongside existing agencies and other religious orders and fulfill welfare services in such places as leper colonies, institutes for the handicapped, community centres for the mentally ill, shelters for families and children in need, secondary schools, assistance for homeless and street children, inhabitants of favelas (squatter settlements), hospital facilities and counseling for the sick.


The Congregation started its presence in North America on 1962 in Toronto. The Brothers entered Canada to assist the young Italian people who immigrated to Ontario. Along with serving the faithful of St. Anthony’s Parish in 1963 they accepted the invitation of the Archdiocese and started the St. Sebastian Church which was offering initially only an Italian service.  As the parish population switched from Italian to Portuguese, the Brothers left St. Sebastian Church on 1982, to move to Woodbridge and to take care of St. Margaret Mary Parish where they started a bilingual service.

In 1985 two priests, including current NAD Delegate Superior Fr. Ugo Stuabotti took the responsibility of building the newly erected Parish of the Immaculate Conception in Woodbridge. In September 2002 the community also accepted the responsibility to serve the parish of the Epiphany of our Lord in Scarborough where the Brothers continue their commitment to the vision of its founder, to glorify God and the Immaculate Mother through concrete love and service for one’s neighbor.

Since 2002 the Congregation has started to increase its  presence in North America and to take over more parishes and chaplaincy.

In September 2002, the Congregation accepted to serve at Epiphany of Our Lord Parish, Scarborough – Toronto. Then in March 2003, the CFIC began a presence at St. Mary’s Parish, Archdiocese of St. Paul Minnesota in the United States. This is an English speaking parish for a small group of families. The community is also involved in the jail ministry.

In December 2003 the Delegation opened a community in Merida, Yucatan – Mexico. It was the first Congregation community bringing the name of Blessed Luigi Monti. The community was given the responsibility of the new Rectory San Martino Caballero which was established as a parish in 2008.

In 2007, the Delegation opened a new Parish, Our Lady of Grace, now Mary, Mother of the Redeemer Parish, in the province of Alberta and in the Diocese of Calgary on the request of the Bishop. The community takes care of the pastoral care of the parish and chaplaincy in a near-by hospital. The parish is a national one for the Italian people in the Diocese and offers mass in Italian as well as both English and bilingual services.

The Delegation began serving St. Maria Goretti Parish in the Archdiocese of Edmonton in 2009. The parish serves both Italian and English communities.

In 2011, the Congregation started its presence in Columbus, Ohio, attached to Holy Cross parish. The brothers care for the sick in the nearby hospitals as hospital chaplains.

The Brothers of North American Delegation are from different countries such as Italy, India, Philippines, Cameroon, Democratic Republic of Congo, Bolivia and Vietnam. All the brothers are actively involved in their ministries and trying their best to live the Charism of the founder.

The General Council has appointed the new  Delegation Council for the North American Delegation starting September, 2022.